What is the perfect body? What standards of beauty does it adhere to? Where is the limit between the commands of fashion and those of health? Between glamour and medicine?

The fundamental home of our individuality, the body has a key role in relational psychology, particularly in a society that elevates beauty to the status of a commodity.

It is these questions that lie at the heart of Maravee Therapy, as the 14th thrilling edition of the festival of contemporary arts and performance returns once again to challenge new issues. The festival was created and is directed by Sabrina Zannier and is organized by the Associazione culturale Maravee. This is an event that is contemporary, wide-ranging and complex, which engages with the public and addresses questions with a commitment to culture and pluralism whilst maintaining the touch of irony and fun that have become its trademark. This year we examine health through the lens of the obsessive search for bodily perfection.

The entire event will last a total of 7 months, visiting 5 locations with 6 exhibitions – two of which are solo shows by international artists- 2 video projections, 4 video installations, 1 video mapping project, 4 performances, 2 theatrical pieces and 15 artist from Italy, Poland, the United States and Slovenia. Maravee Therapy promises to surprise with new artistic horizons and previously unseen wonders, thanks to the support of the Assessorato alla Cultura della Regione Friuli Venezia Giulia and Gervasoni, the company who is the main sponsor of the project, with the assistance of the Comune of Gemona del Friuli and the Comune of Pordenone.

After the preview in Pordenone with the theatrical performance Il Corpo Ridisegnato. Catarsi dell’incurabile held in August, Maravee Therapy officially opens its doors on Saturday 31 October at 9 pm at the Castello di Susans in Majano (UD). This opening sees the castle transformed into a realm of visionary creativity focused on the care of the body – in terms of therapy and devotion – aimed at wellbeing which transforms into “being beautiful”. This is therefore a realm of the surgical body, which confronts the multiplication of identity in its torment; of the body from a genetic laboratory, which is re-born in the hybrid; of the gymnastic body, balanced between beauty and health; of the dieting body, which brings a vegetarian menu to the table. 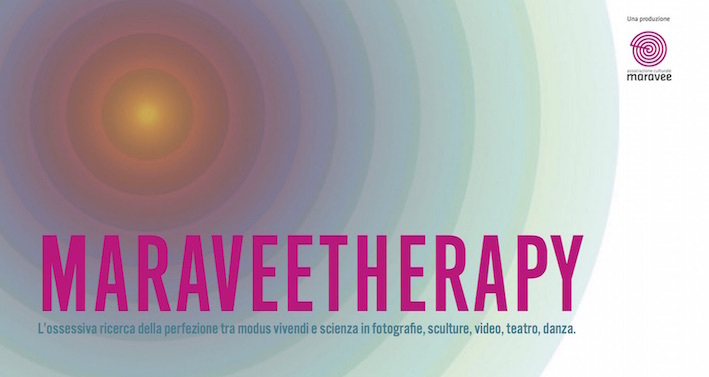 Bringing together timeless myths and contemporary yearnings, the French artist ORLAN is the undisputed personification of the body taken as material for a constantly developing biological sculpture, and it is she who will raise the curtain on the 2015 edition of Maravee. Through re-examining painting and sculpture, she has formed an aesthetic alphabet focussed on the value of the human body in the social sphere. Her art is a negation of pain as a form of redemption; it is an anthropological research into the concept of beauty and a renunciation of all classical and renaissance standards. With her solo exhibition Terapia dell’ibrido, ORLAN brings an incisive message to Maravee: the need to overthrow the subservience to standards of beauty imposed by fashion, to generate a body that contemplates aesthetic standards which come from different civilisations: African, Indo-American or Pre-Columbian. This can be seen in the photographic series Self-hybridation, where ORLAN’s face becomes the stage for the beauty of deformed craniums and cross-eyed gazes. The works of Self-hybridation are dedicated to the masks of the Beijing opera and have never been seen before in Italy. They open the exhibition with a room that allows visitors to playfully interact with the artworks through an augmented reality device that allows them to see ORLAN appear in 3D

The next step considers genetics with the series Harlequin’s Coat, which portrays the artist in the operating theatre, like in the works from the early 90’s which recorded the performance surgical operations which are the foundation of her corporeal Art. This work, however portrays a biopsy, during which the artist is shown covered with a Harlequin cloak, a symbol of the hybrid, a composite organic coat which becomes an assembly of cells and symbols of different people and animals, a metaphor for the intermingling and welcoming of that which is other than the self.

The official opening is precede by the much anticipated meeting with the French artist at 6pm, where ORLAN herself will illustrate her creative process that has given life to her personality.

The first floor of the castle hosts the exhibition Restauro e riscatto della bellezza, with a video-installation by Debora Vrizzi and a video-projection by Silvia Camporesi, both of which explore the perfection of the body in close symbiosis with the mind through personal stories of physical therapy and sporting activities as a journey towards redemption and revelation.

On the ground floor of the caste, the kitchens have been opened to the public for the first time in order to host the solo exhibition Genetic Lab by the Polish artist Monika Grycko. This reveals a fantastical parade of anthropomorphic figures. These hint at mythology as they inhabit the stainless steel shelves of a visionary laboratory for ethno-anthropological analysis

Picnic sulla Torre di Babele, the exhibition by Isabella Pers and Tiziana Pers, also on the ground floor of the castle, explores therapy and health through the lens of bio-centrism, with a wealth of living vegetation, video and photography.

Therapy, for the body and for the mind, is at the heart of the inaugural events. From the fascinating video mapping over the entire façade of the castle by the Liceo Artistico Sello in Udine, to the theatrical piece Ossessioni, with Claudia Contin Arlecchino and Rita Maffei, which represents the most extreme research for the perfect body with a touch of irony, reciting the pithy dialogue between Doctor Frankenstein and his “creature”, to the testimony expressed in the solo dance piece Il riscatto.

Il fiume di sotto – a dance performance written and performed by Luca Campanella, specially adapted for Maravee from the project Paesaggio d’acqua by the Compagnia Arearea, produced by Mittelfest 2015, – opens the exhibition Picnic sulla Torre di Babele, which examines the remains of a life that has changed its appearance, and the flowing of the river becomes elevated to a metaphor of human existence. The evening comes to a conclusion with the Food Design event within the installation, where a vegetarian buffet blossoms from within the vegetation. 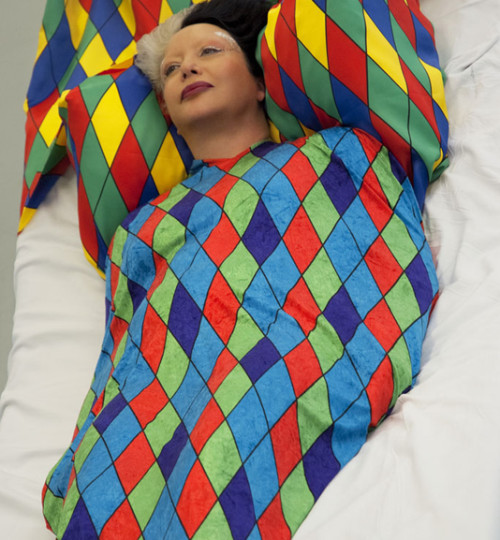 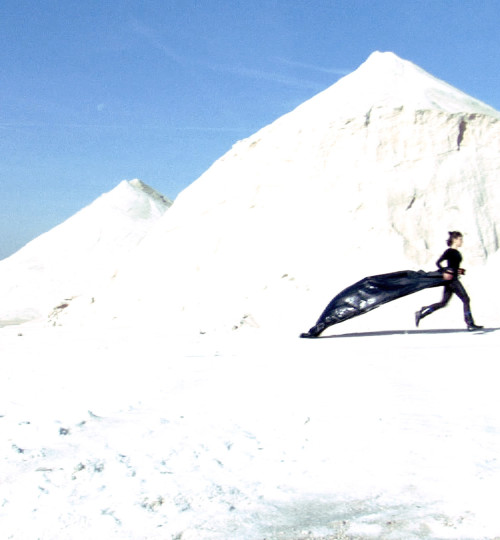 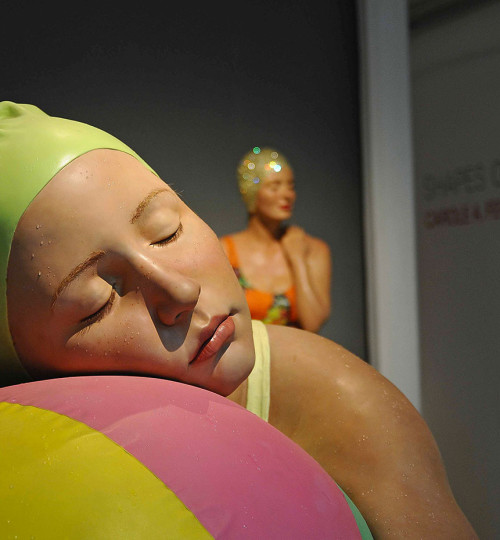 The Museo Civico del Palazzo Elti in Gemona del Friuli (Ud) will host the solo exhibition by Carole Feuerman, which opens at 6pm on the 19th December. The American artist Carole Feuerman is one of the most renowned and appreciated hyperrealistic sculptors in the world. Her exhibition Sport del bellessere, presents the works she is best known for, and which won her the first prize at the Beijing Biennale: her figures connected to water. These sculptures of bathers and swimmers are tied to the artist’s own deeply-felt physical and emotional experiences. Her work is the fruit of an artistry that is full of sensuality, tied to imagery that mixes together form and desire, and where hyperrealism plays with Pop Art, enriching it with handcrafted skill and a knowledge of materials. Her figures are so “alive” that they almost seem to breathe. In the heart of winter, Maravee brings a touch of summer with this exhibition, where the rooms of the museum become transformed into a lush Garden of Eden, exploring the concept of Therapy in a positive sense of living.

The last exhibition in the project opens in Slovenia, at the Galerija Loža in Capodistria on the 29th January 2016 at 6pm. The Slovenian artists in the exhibition will explore the subject of health, which will be continued by the theatrical performance specifically created for Maravee, which will be held at the Gledališče Koper in February 2016. Maravee Therapy has been made possible also thanks to the collaboration with the Associazione Mittelfest, the Obalne Galerije Piran, the Gledališče Koper, the galleries Michel Rein in Paris, Prometeogallery in Milan, Aria Art Gallery in Florence, the Scuola Sperimentale dell’Attore, the Associazione culturale Arearea and the Liceo Artistico Sello.