Glass and Design -The creative process in the historic Murano glass factories of the 20th century, the exhibition project curated by Caterina Toso, glass historian and inheritor of the Fratelli Toso Archive, is on show at InGalleria / Punta Conterie Art Gallery in Murano through May 10th, 2020. The exhibition is dedicated to retracing Murano decade by decade as it was in the last century: a source of ideas, art, innovation but also an extraordinary and hardworking productive and commercial hub on an international scale. The exhibition, which follows on from the inaugural project Lino Tagliapietra. Glasswork, is part of the programme of exhibitions and events promoted by Punta Conterie – in a unique cultural calendar with a four monthly rhythm – in the Murano and Venetian panorama, in which glass art, design, visual arts experience new modes of expression. With alternating glimpses at the contemporary scene and that of the past, the projects to emerge in the new Murano hub will be the elements of innovation, experimentation and cross-pollination between different disciplines which have always characterised the glass art of Murano. Glass and Design. The creative process in the historic Murano glass factories of the 20th century brings to the halls of InGalleria about 50 artistic glass objects made in the years between 1910 and the 1980s, iconic works which speak not only of the factories which made them but also of the times in which they were created, with the addition of drawings telling their story: sketches, preparatory drawings, drawings for the furnace, definitive post-production drawings, glossy images for catalogues.

Fratelli Toso, Barovier&Toso, SALIR, Venini, AVEM, Seguso Vetri d’Arte, Vetreria Aureliano Toso, Vistosi, Galliano Ferro: these are the local glassworks selected by the curator Caterina Toso for their historicity (all were founded in the first half of the last century). These are large factories where the figure of the designer remained very distinct from that of the master glass-maker, although a close collaboration between them was never absent. The exhibition is an in-depth focus, moving from the glass to the role of design and on to the structure of the archives of the Murano glassworks, archives that, once decoded, give a more precise image of how the twentieth century firms worked. The design, the concept, are not enough on their own. A good design can never be translated
into a work of art without the expert touch
of the master glassmaker — Caterina Toso A trip back then, into the world of design from which emerge the names of some great twentieth- century glass designers, from Tomaso Buzzi to Fulvio Bianconi, from Ercole Barovier to Dino Martens whose designs found perfect execution in the hands of the Murano masters. Drawings and works, in addition to the archival material on display, from the glassworks of Fratelli Toso, Barovier&Toso, SALIR, A.Ve.M and Galliano Ferro, and from the Giorgio Cini Foundation and the Centro Studi Vetro (Centre for Glass Studies) with the designs of Venini, Seguso Vetri d’Arte and Aureliano Toso.

The works, all original glass creations, come from important Italian and foreign private collections, including the German collection of Lutz H. Holz and from the heirs of Vistosi. Many pieces were presented at the Venice Biennale, others are lesser – known works: a previously unseen design by Hans Stoltenberg Lerche originally executed by Fratelli Toso or the window glass designed by Vittorio Zecchin for the doors of the SALIR company.

The exhibition will be accompanied by a catalogue produced by Designwork. Among its pages you can read the words of Marc Heiremans, one of the most important researchers into Murano glass and an expert on the Twentieth century. 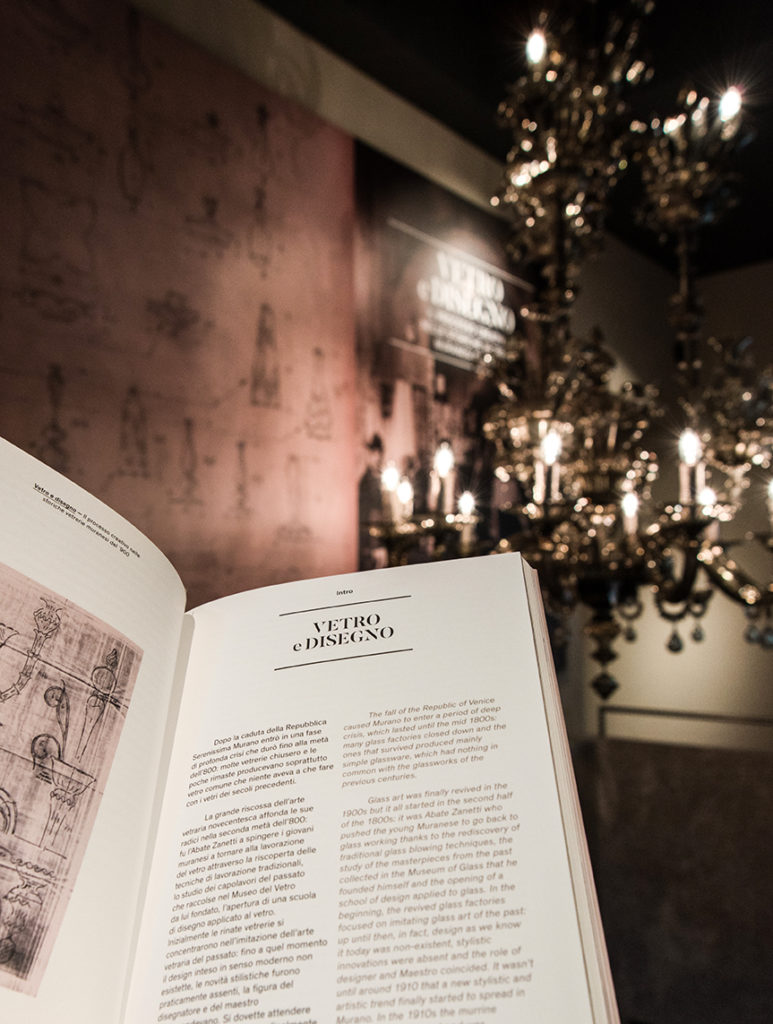