Empathic like the innate ability to generate involvement, identification, participation.

Luca Nichetto — curator of the fourth exhibition project scheduled from 11 September 2021 to 10 April 2022 in the halls of InGalleria, the Art Gallery of Punta Conterie a Murano — chose an adjective to describe this exhibition which will focus on the attractive power of matter and shape.

Empathic. Discovering a Glass Legacy, is the full title of the project, showcasing installations and limited- edition pieces made by Ini Archibong, Noé Duchaufour-Lawrance, GamFratesi, Benjamin Hubert, Richard Hutten, Elena Salmistraro and Marc Thorpe invited by the curator— who will also exhibit his own installation — to freely incorporate Murano glass in their works. They were not given any brief or constraint: instead, they were left free to empathetically conceive, design and experiment with glass in its multiple forms: blown glass, glass rods, cast glass.

Empathic. Discovering a Glass Legacy traces a path among archetypal shapes, totems and pieces to establish a dialogue with viewers through the language of emotions, perceptions and, in a few cases, memories.

Produced by InGalleria Art Gallery under the direction of Alessandro Vecchiato with the involvement of the best Murano glassworks each specialising in a specific glass working technique, the installations and editions present in the exhibition give a snapshot of the extraordinary artistic potential of the dialogue between master and designer, entering somehow into the heart of Murano’s vocation: production.

Skills of craftsmanship on the one hand, pure creativity on the other. An alchemical combination that is able to stimulate the spheres of research, experimentation, discovery or rediscovery of the heritage of the world of glass. Not surprisingly, “discovering a glass legacy”.

In this area of investigation and crossing boundaries, of eclectic inspirations and give-and-take with the material, multiform works have taken shape according to the wishes of Vecchiato who writes in the introduction to the exhibition catalogue: “Asking Luca Nichetto to conceive and curate this exhibition, I wanted to see what would happen if we all got involved by experimenting, disrupting the grammar of the forms, techniques and ingenuity of each to reach unprecedented results”.

The results were not long in coming with responses a long way from conventional schemes.

If Ini Archibong, an American designer of Nigerian origins, chooses to transfer his fascination for traditional African wooden masks into the Africa installation of strong chromatic and formal expressiveness, 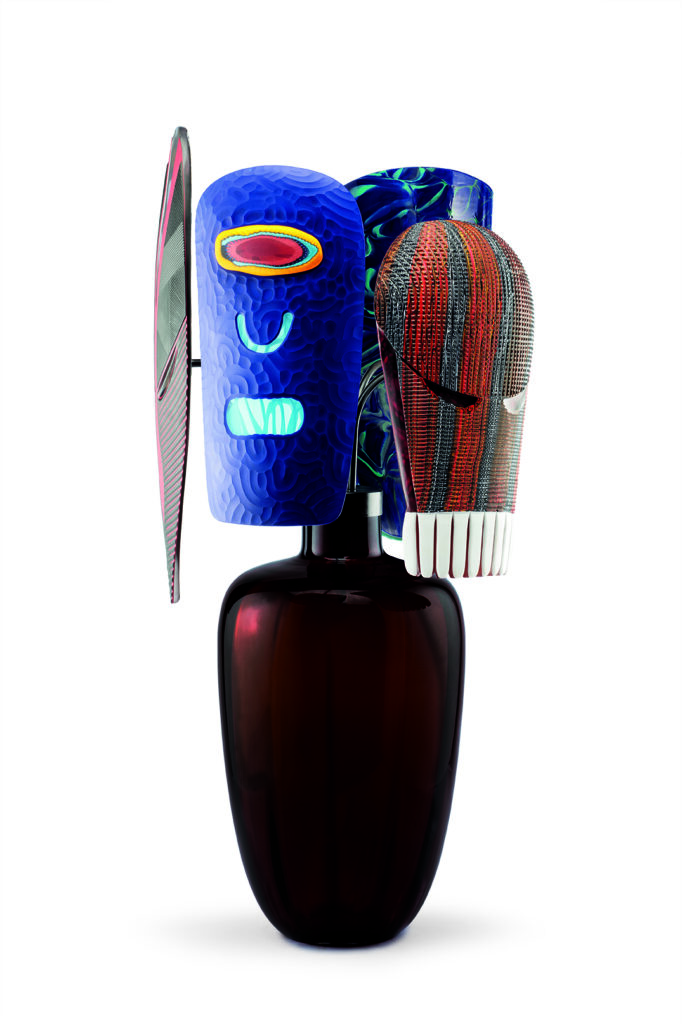 Noé Duchaufour-Lawrance finds inspiration in the sensitive and dusty shades of the photographic series “Down by the water” by photographer Lucie Jean – focused on a small island in the Venice Lagoon called Madonna del Monte – for a series of smallsized furnishings / sculptures of the same name. 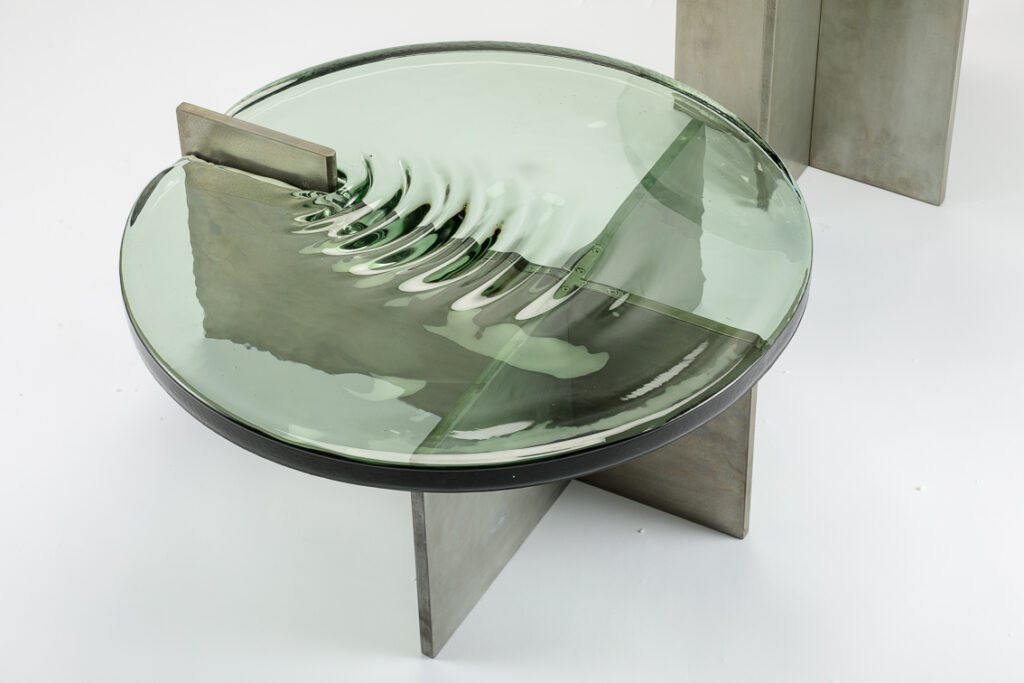 GamFratesi looks to the lagoon of Venice, the foundations of the entire city and to the world of glass for Palafit, a small landscape composed of different forms in large blown glass lying on wooden sections obtained from “bricole”, the traditional poles that mark the waterways across the lagoon. 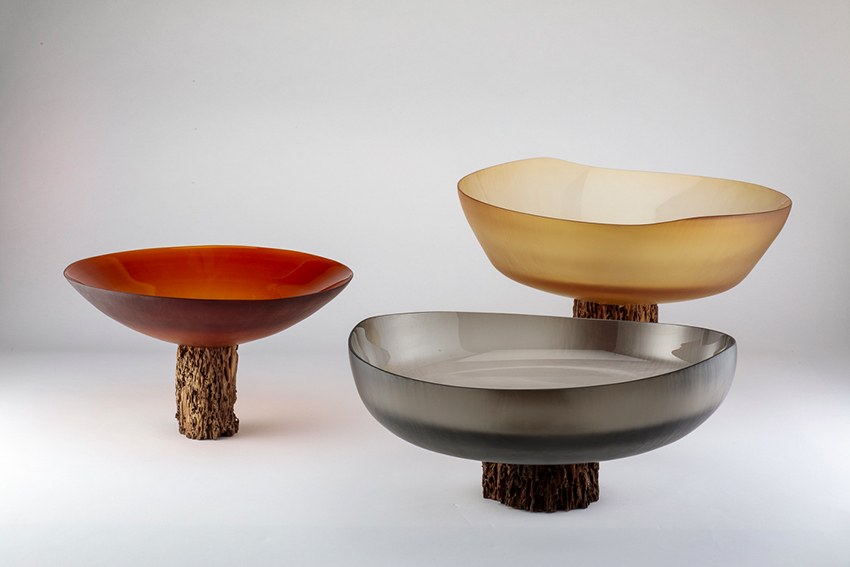 Matter, in its ductility and versatility, is the search engine for Benjamin Hubert who observes the craftsman skills of Murano glass masters to design Granule, a series of objects in which chromatic gradients mark the different shapes and textures of glass: smooth, satin, melted, in granules…. 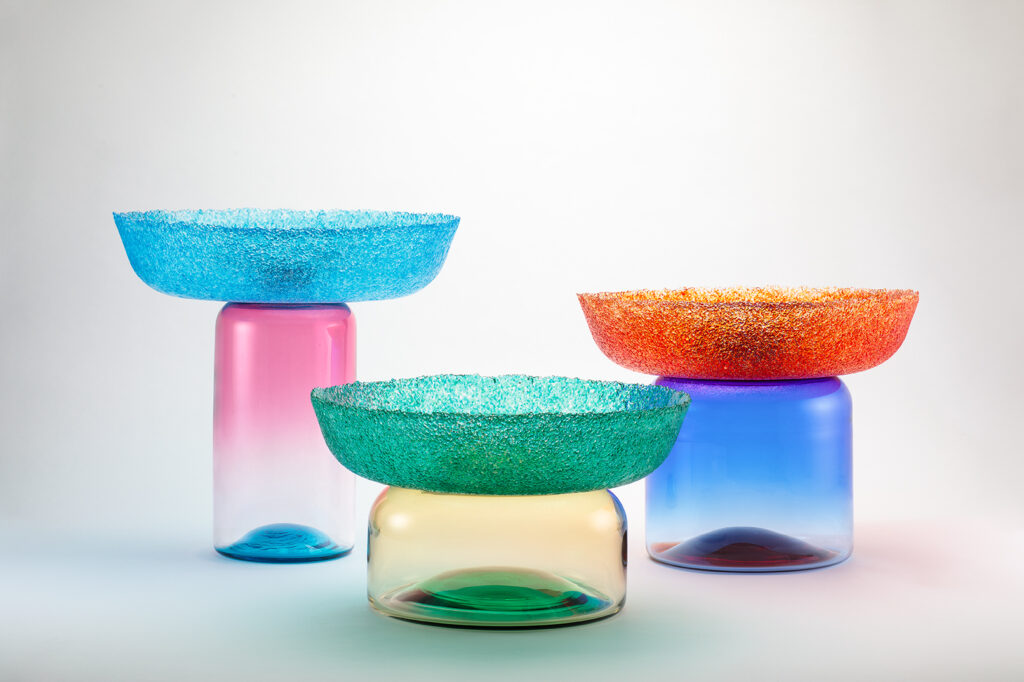 Experiments with pure colour overlays for Richard Hutten, a designer who has made irony, positivity, play into the matrix of his project. The verticality of the Layered totem thus becomes a hymn of joy to life: stratified, varied, intense. 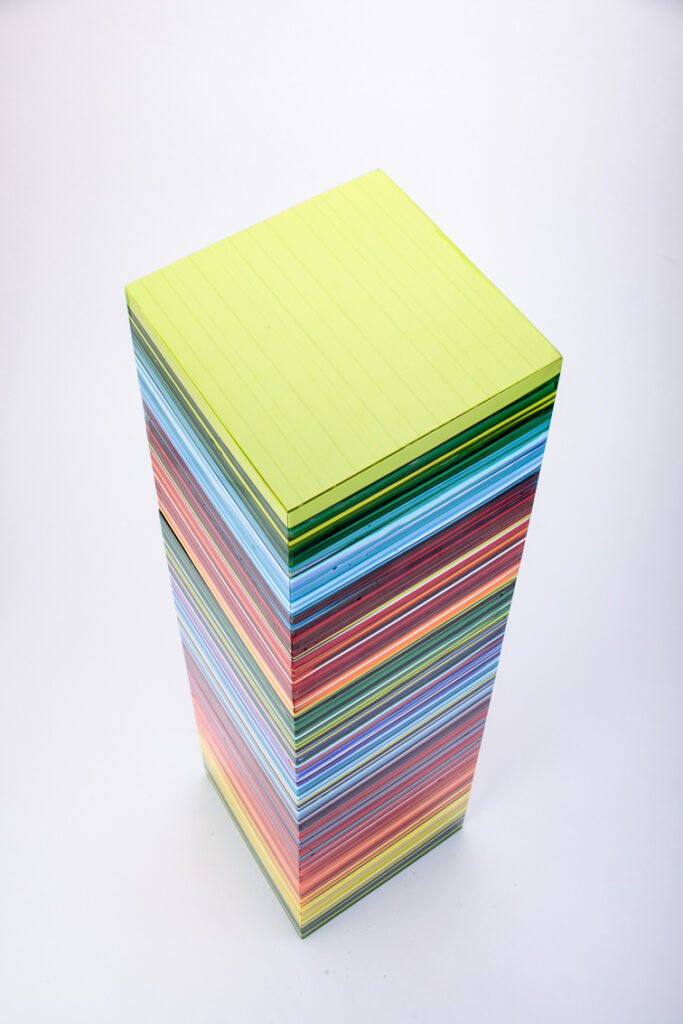 Luca Nichetto, who has glass and Murano in his DNA, plays with tradition by taking up childhood tales – Goldrake above all – to give life to Mecha, three small modern colourful glass robots evoking icons in rustproof and glittering armour. It is the essence of antitheses, the wonder of creativity. 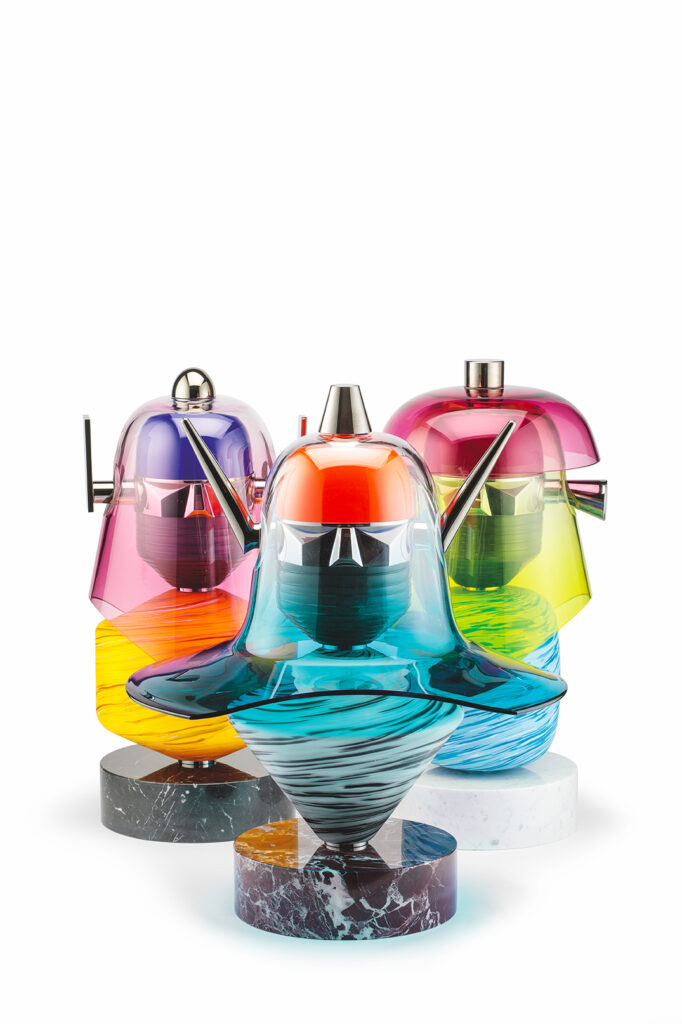 Feminine, lithe, colourful, Elena Salmistraro’s mirror is inspired by the sinuous movement of the Gorgons’ serpents. Large, almost oversized, strong, imposing, rich, iconic. The mirror that both enhances the beauty it reflects and petrifies the viewer. Medusa is an inventory of the ancient techniques and processes of Murano mirrormaking, but in a contemporary and exuberant key. 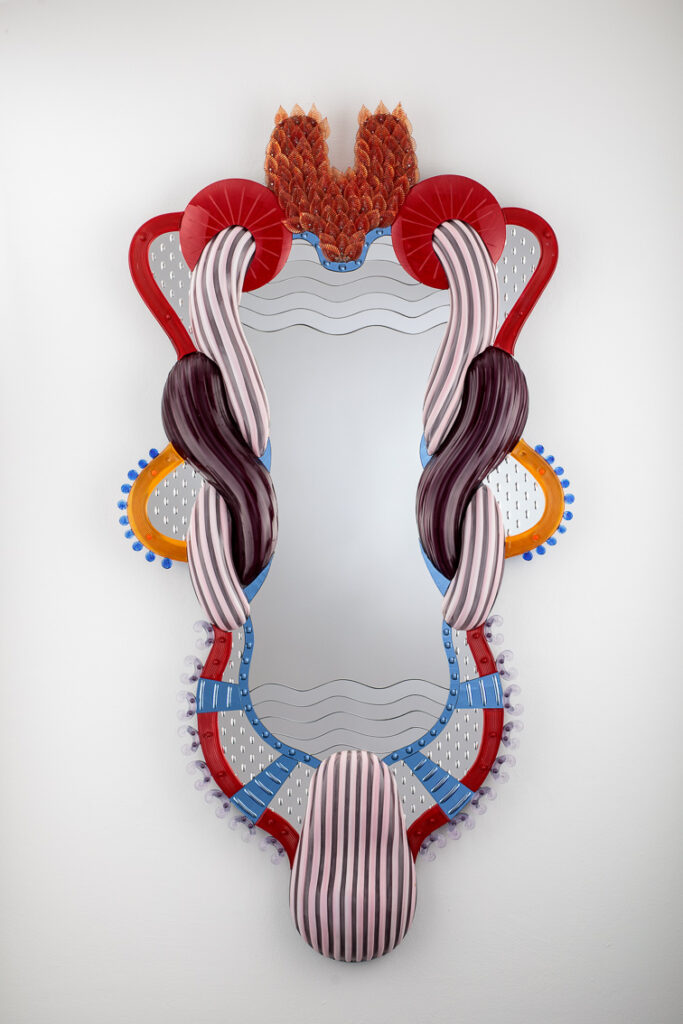 Finally, Marc Thorpe pours the shades and shimmers of the Venetian lagoon into a collection of blown glass objects – some potbellied, others slender – which in terms of technique and formal solutions seem to float in the ether. Its name: The Family. 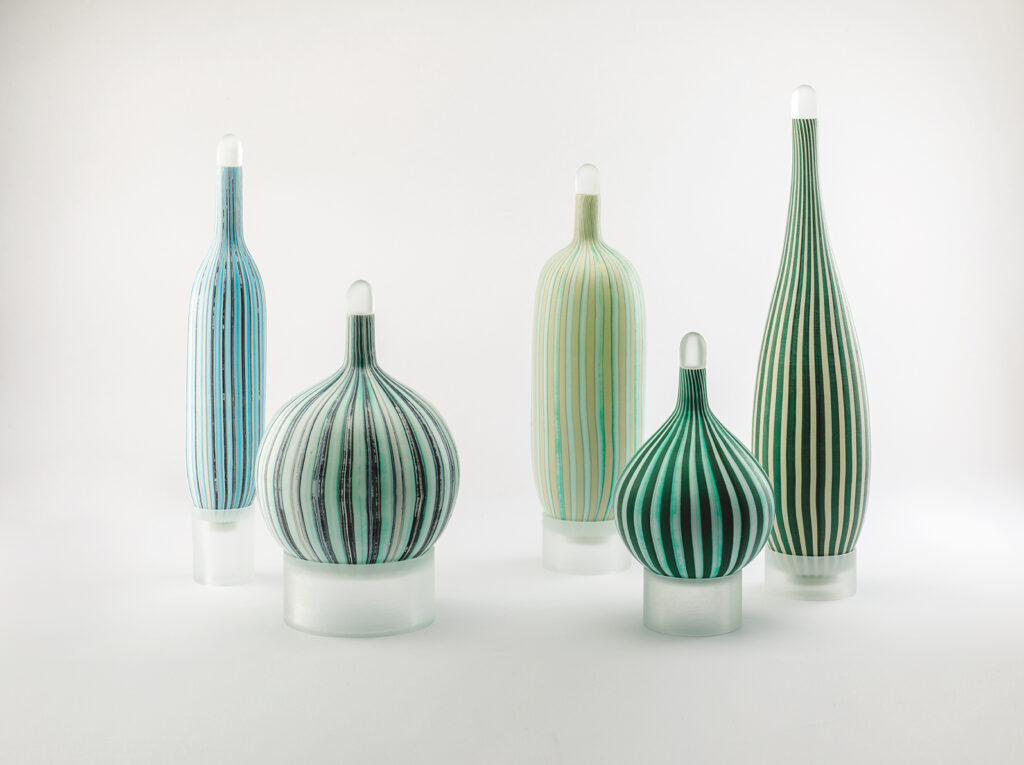 An expressive multitude that Luca Nichetto summarises with these words: “I believe that the beauty of Empathic cannot be expressed by a single piece, but by the fact that the creation process had the sole intention of supporting Murano glass. And I like to think that we too are part of the rich tradition of designers who have worked with Murano glass over the years – such names as Carlo Scarpa, Ettore Sottsass, without forgetting more contemporary artists such as Jeff Koons….” 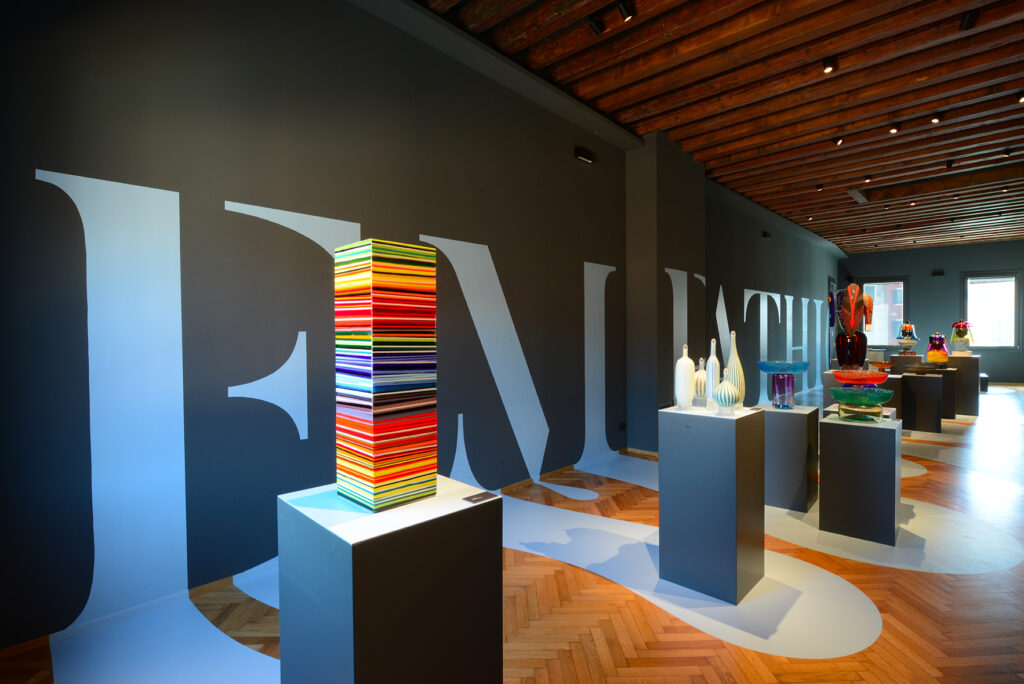